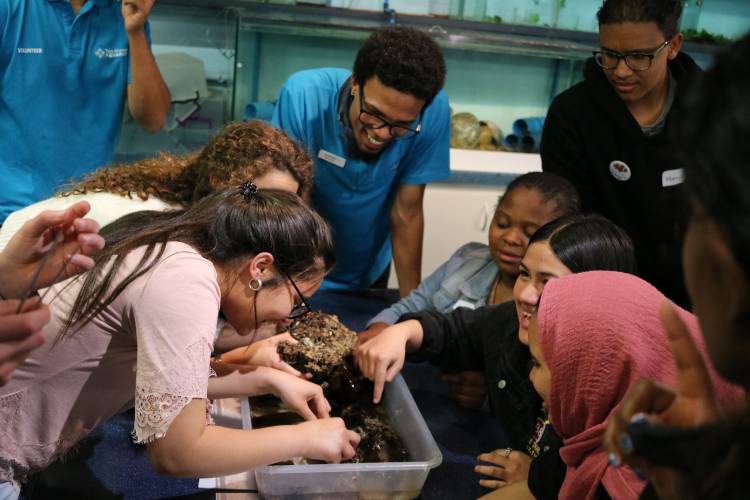 The Two Oceans Aquarium has been a certified Diamond member of the Heritage Environmental Rating Programme for three years. It works towards continually improving on the sustainability of its operations and aims to have ISO14001 certification in place within the next two years.

The Aquarium has targets to reduce its water and energy consumption, and its waste production, and analyses its carbon footprint on an annual basis.

Our on-site photovoltaic panels contributed to diverting 190 tons of CO2e (this project was initiated in 2015 when we diverted 23 tons of CO2e). The maintenance and monitoring of these units have contributed to the successful generation of green energy. About 10-12% of required operational energy is supplied by solar generated energy, with the rest of our energy supplied by the parastatal power supplier, Eskom, which uses non-renewable coal. Between 2015 and 2018, a reduction of 73 tons of CO2e was achieved through reducing energy usage, even though we expanded and added additional life support systems during this time.

Waste management
Our total waste production decreased by 80 tons between 2015 and 2018.

Through increased efforts in reducing total waste and increasing recycling a reduction of 5 tons of CO2e was achieved between 2017 and 2018. In 2018 we avoided CO2e of 40 tons through recycling efforts.

We aim to reduce our total waste and ensure continuous repurposing and recycling. We have an independent waste management company, Wasteplan, who sorts waste and recyclables onsite. Aquarium staff and visitors support our recycling efforts and bins within the Aquarium have sections for recyclable and non-recyclable content. All e-waste is delivered to an e-waste facility. Hazardous items are disposed of responsibly by external service providers. This is part of our journey to drive positive behaviour change within our staff and visitors.

Water management
In response to the water crisis in the early part of 2018, the Aquarium undertook various initiatives including switching off all the taps in its public and staff bathrooms and providing hand sanitiser; disconnecting public toilets from municipal freshwater and switching over to a supply of sea water (resulting in a 50% saving in freshwater consumption between the calendar years 2017 and 2018), and running a successful social media campaign to encourage Capetonians to #SaveLikeAPenguin.

Awareness and education
The Aquarium’s exhibits not only showcase the beauty and wonder of the marine life which lives off the southern African coastline, but also raise awareness of the need to protect and conserve our ocean heritage. The core essence of the Aquarium’s brand is sustainability through environmental education and conservation. Conservation and sustainability-oriented messaging is communicated through exhibit signage, daily talks at animal feeds, on the Aquarium’s website, blog and social media platforms, and through themed speaker evenings which are hosted throughout the year. In this way the Aquarium aims to inspire and empower people to see the connections between their actions and the health of the oceans.

In order to further inspire and empower people the Two Oceans Aquarium Education Foundation was established in 2018. The aim of the Foundation is to promote and expand on the already excellent educational, conservation and research initiatives in the form of a registered Public Benefit Organisation in terms of Section 18A of the Income Tax Act, 1962.

The Aquarium has a well-established and internationally recognised environmental education centre. Approximately 75 000 school children from around the Cape Peninsula receive formal and dedicated marine science lessons every year. Three outreach programmes reach more than 35 000 children, mainly from disadvantaged areas, annually. Free courses for learners from Grade 6 through to Grade 12 are offered through the Aquarium’s Marine Sciences Academy.

Conservation and wildlife
The Aquarium seal team rescued 64 seals from entanglements in 2018. The staff logged 1 867 hours of patrolling (on foot on the jetties and by boat) to monitor the seals in the V&A Waterfront harbour and assist where and when possible.

The Aquarium has a well-established turtle rescue, rehabilitation and release programme and close to 450 turtles have been successfully released back into the ocean after rehabilitation. In 2018, the turtle team spent 3 767 hours rehabilitating sea turtles of all sizes and 18 turtles were released in December 2018.

Plastic campaigning
The Two Oceans Aquarium continues to campaign against the use of single-use plastics which include plastic shopping bags, straws, bottled water, takeaway packing and cutlery. From being a fairly lone voice back in 2013, when the Aquarium first appointed its full-time environmental campaigner, it has been increasingly joined by individuals, organisations, corporates, and retailers in South Africa promoting and educating to reduce single-use plastic in this country.

In 2018, the Aquarium launched its beach cleanup campaign called Trash Bash. One of the goals of Trash Bash is to collect scientific data about the 12 most prevalent plastic litter items found in the ocean, how they are distributed and the rate at which the debris collected on Sunset Beach. These items are dubbed “The Dirty Dozen”. To study the accumulation of the Dirty Dozen, the same 1km stretch of beach was cleaned four times throughout the year. Some statistics from these cleanups include 5 800 sweet wrappers, 4 454 lollipop sticks and 3 772 earbud sticks. This data will be used in a study by Professor Peter Ryan, based at the Percy FitzPatrick Institute at the University of Cape Town, who has been studying plastics on Cape Town beaches for decades.

This year we are doing six cleanups at different beaches – nearly 1 500 kg of trash has already been collected in the first three cleanups. (Trash Bash 2018, Trash Bash 2019).

To raise awareness of the oceans, the Two Oceans Aquarium is designed to showcase the beauty and diversity of the oceans off southern Africa. Its awe-inspiring exhibits aim to encourage love, respect and understanding of our oceans so that people are motivated to take action for their future wellbeing and to use marine and other natural resources sustainably.