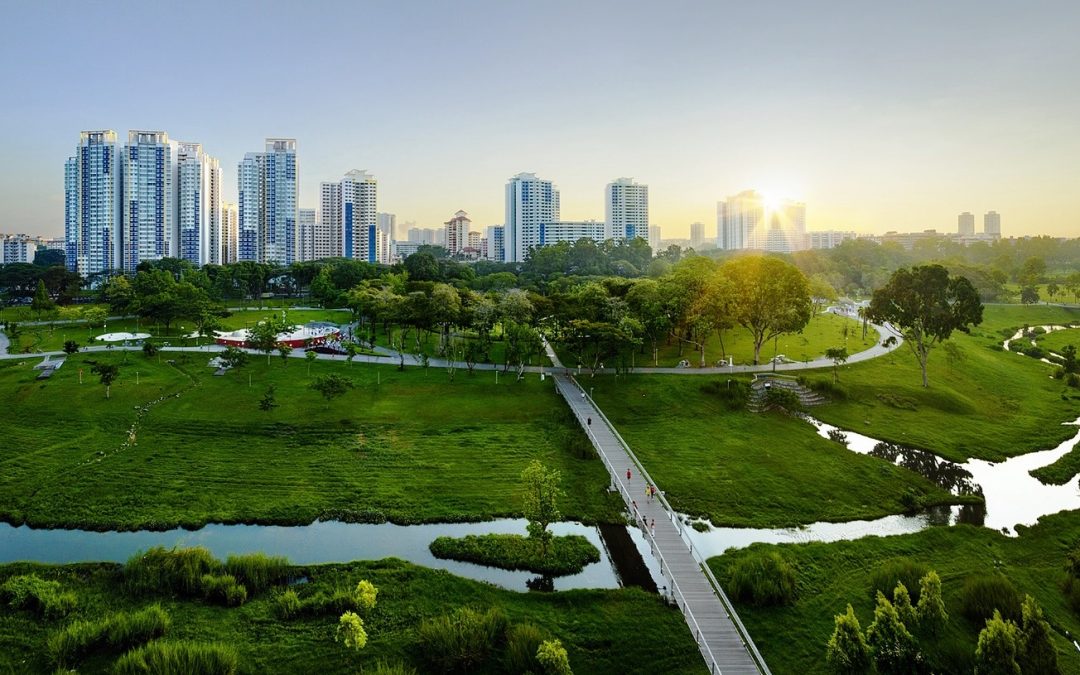 Imagine a world where there was no pollution, no threat of global warming, and certainly no risk of diseases caused by airborne pollutants that one cannot even see with the naked eye. Well, this is possible through green cities. Green cities subscribe to a green way of life – living in an environmentally-friendly manner that causes less harm to the environment and people.

Buildings in green cities have rainwater utilisation systems to recycle and reuse water. The buildings have been built out of eco-friendly materials to ensure that they reduce volatile organic compound emissions. They have modulate lighting based on natural light, as well as efficient plumbing fixtures and wastewater usage to reduce consumption with enhanced ventilation.

Green buildings also feature high efficiency light fixtures and solar panels – these capture the natural heat from the sun. Rooftop gardens allow people living in green cities to grow plants and vegetables that can be watered by the rain. Green roofs reduce stormwater runoff as well.

In today’s world there are a few cities already dubbed green cities across the globe: from Copenhagen, Denmark, hailed as Europe’s green capital to Amsterdam, Netherlands, the city of bikes which has more bikes than cars to Singapore, dubbed the greenest city in Asia and Curitiba, Brazil, that has realised the power of recycling.

Looking closer to home, Rwanda, already known as the cleanest city in Africa and the third greenest city in the world, is embarking on a $5-billion project to build Africa’s first green city in its capital, Kigali.

On the South African front, the major metro municipalities are also embarking on efforts to make their cities green with some municipalities winning the Greenest Municipalities Competition (GMC). The Department of Environmental Affairs (DEA) that has a mandate to manage and protect the environment runs the GMC programme. This stems from the Constitution of the Republic of South Africa that clearly stipulates the right of every citizen to live in a healthy environment, which is free from harmful effects.

The GMC evaluates municipalities on strategies in the following criteria:

These criteria evaluate how municipalities manage key green city principles and how they are moving towards more sustainable development. The GMC was won by eThekwini Municipality in 2018 and the City of Johannesburg in 2017. The Mayor of eThekwini Municipality, Zandile Gumede said the win was due to concerted efforts to prioritisze environmental issues.

For South Africa to move towards not only green cities but a green economy, partnership and collaboration is required from both business and government. The benefits of green cities are endless: less pollution, therefore fewer respiratory related illnesses, financially astute communities with materials that can be sourced locally, thus reducing the costs of transportation that has a bearing on land and roads, and a reduction in high unemployment rates.

With laws such as the carbon tax law that came into effect on the 23rd May 2019 to enforce penalties to emitters predominantly from industry and to follow the “polluter pays principle”, South Africa is moving to a more energy efficient mentality and ultimately to green cities. Laws such as these will encourage and enforce companies to assess their air quality and pollution management strategies and seek alternate sources of energy and material supply.

The City of Cape Town, Tshwane, Johannesburg and eThekwini are well on their way to green cities with varying initiatives in place to build more sustainable municipalities. Proper policy guidelines and planning together with sound leadership is key to turning South Africa’s municipalities into green municipalities and therefore green cities.