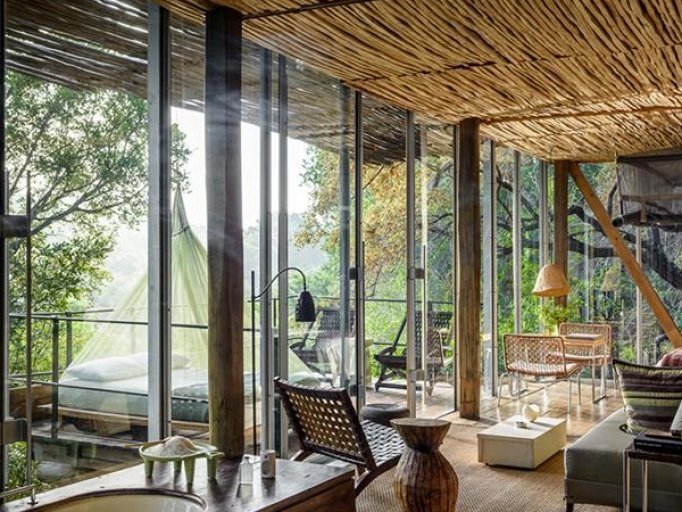 The Fever Tree is a wonderfully intelligent and creative organism of Mother Nature. A striking pistachio trunk sprouts thorny branches with green leaves and yellow pom-pom flowers. But here’s the magic. It also has a “sacrificial limb”, a single branch that turns brown and dies as the tree funnels all the toxins that harm the tree into one place, in order to allow the rest to flourish.

And as we made our way around the recently re-launched Singita Sweni Lodge we came to understand the genius of the brand’s purpose: To harmonise with the unparalleled genius of nature.

At almost every touch point, the guest experiences the creative bursts of colour from its immediate environment – drawing on the iridescent sheen of bird feathers, butterfly wings and beetle shells to deliver a bold, new African context for contemporary design, architecture and food. Even the rangers point out the colours of the glossy starling, malachite kingfisher or lilac-breasted roller in the lounge area, along with pops of teal, emerald, citron, yellow and pale pink from other gems of Lebombo nature. Singita Sweni makes no excuses for its audacious modernity, despite that it’s a relative novelty in the South African luxury safari scene – the type of innovation one would expect from celebrated South African interior design team Cecile & Boyd, who are responsible for the look and feel of all 12 award-winning lodges and camps across South Africa, Tanzania and Zimbabwe.

A pioneering philosophy is deeply ingrained into the culture of the brand by Luke Bailes, arguably the most prominent visionary in African hospitality. But not for Singita’s justifiable acclaim with respect to architecture and design, but more so because his 100-year vision promises to conserve, preserve and protect the one million acres of Africa in their care for future generations. We’ve all heard these bold claims before, but brands rarely put their money where their mouth is.

So as I toured their sustainability commitment of 1188 solar panels, a Tesla Powerpack system, and borehole water plant, my typical flame of marketer’s cynicism was promptly snuffed out. Trevor Henwood, the senior manager who runs the Lodges’ maintenance portfolio, shared not only his joy for the ever-evolving renewables initiative, expanded four months ago, but the sincere drive of the owners – “it’s more about sustainability than it is about money,” to use his exact words. The unified message of Singita as a conservation company carried real credence and has already seen promising results. Compared to the initial system in same two months in 2015, production of solar energy has increased by 1000% to 219,454 kWh, resulting in a 79% drop in diesel used by the generators, saving 132 tonnes of carbon emissions.

But if my waffle about sustainability isn’t your thing, let’s get back to the guest experience. Re-launched in August 2017, Sally Tsiliyiannis of GAPP architects worked on the design and layout of the new areas, crafting a handful of diverse spatial experiences with real flow between them, linking a sophisticated dining experience and show kitchen, a new outdoor dining deck and indoor dining area, marble bar and lounge, fire pit and viewing deck, and a new rim-flow lap pool perched on the Sweni River. The high ceiling blows the space open and draws you into Cecile & Boyd’s use of colour, the clean lines, the asymmetry of the objets, and the element of the unexpected is a jolt to the senses for a traditional bush traveller used to the dark wood and green canvas, synonymous with Kruger.

Each day before we set out on our drive, we observed a crocodile or a hippo, slowly ease into the water and quietly move off into the distance. Well-known restauranteur Liam Tomlin has united with Andrew Nicholson, the Executive Chef at Singita Kruger National Park, to put together a menu that matches the choice of settings, served as one would expect with an artistic element of surprise, easily matching the finest dining you might find in Cape Town, Johannesburg or any other culinary-acclaimed city for that matter.

While the six lodge’s suites do not have a pool, we stayed in the new pool suite with the unique inclusion of a private swimming pool and shaded riverfront deck, which can be connected to the adjacent unit to create a more generous two-bedroom suite, offering guests an extra layer of privacy – perfect for families and honeymoon couples. All suites have outdoor showers that overlook the river, and outdoor daybeds where you can spend a night under the stars.

The spa menu is about simplicity and uses local materials for massage treatment or skin applications. Yoga is soon to be introduced, and even the rangers are helping guests to make a connection to nature through meditation and mindfulness. This is “conscious travel”, the new solution for urban weary travellers.

Service was not only exceptional, but it was fun and discerning, so we often found ourselves laughing with a team that was comfortable in themselves, in their brand, and in their culture, possessing an intrinsic understanding the client’s pace and rhythm, dialling up or down where necessary.

I was speaking with Jon Cherry, an interesting and thought-provoking marketeer for leading brands, while studying a MPhil in Future Studies – in layman’s terms, the understanding of what our planet may be like in the ‘time yet to come’, as far ahead as 1000 years. His insight was that, for the earth and humankind to survive, we will need to align and commit to a longer-term plan that is passed from generation to generation with a blueprint that is upheld and enhanced continually, irrespective of which leader is in charge or their party’s political agenda. As we know all too well, and not just in South Africa, that may be asking the impossible of politicians, and it will be the role of the private sector to drive change from the ground up. Our planet’s population is using the environment foolishly as it’s “sacrificial limb” and we can only hope that more leaders like Bailes will hold firm over the long term to play a critical part in retaining what is magical about our planet for our grandchildren, and their grandchildren in turn. 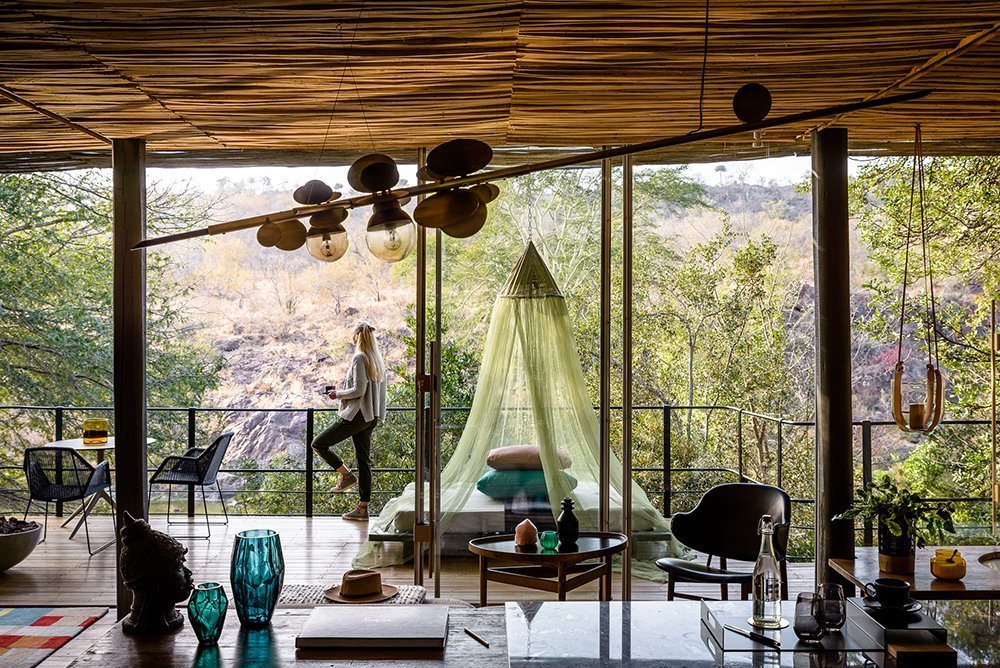 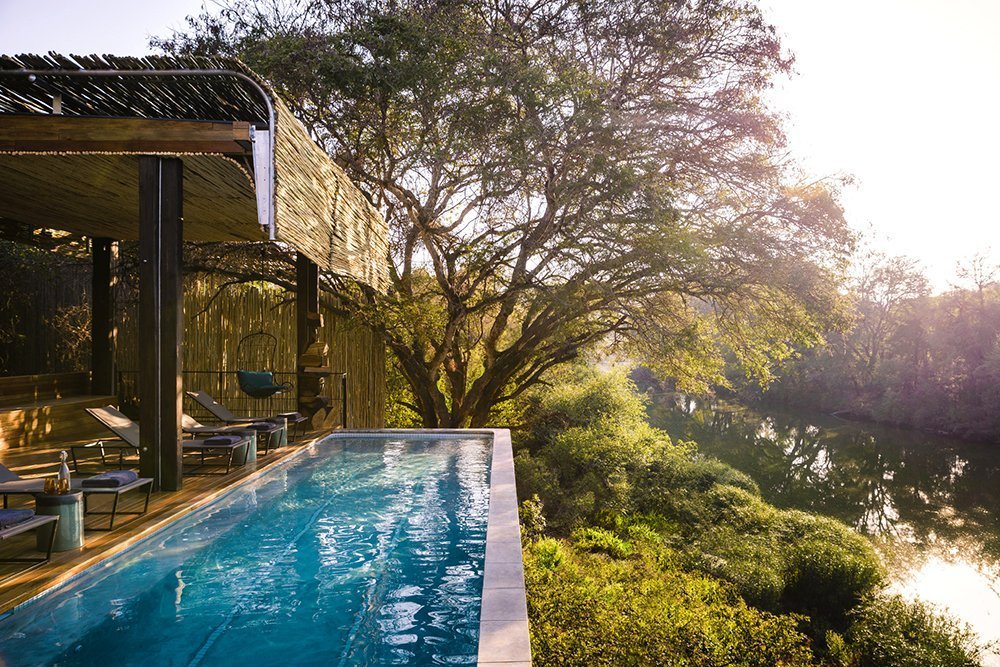