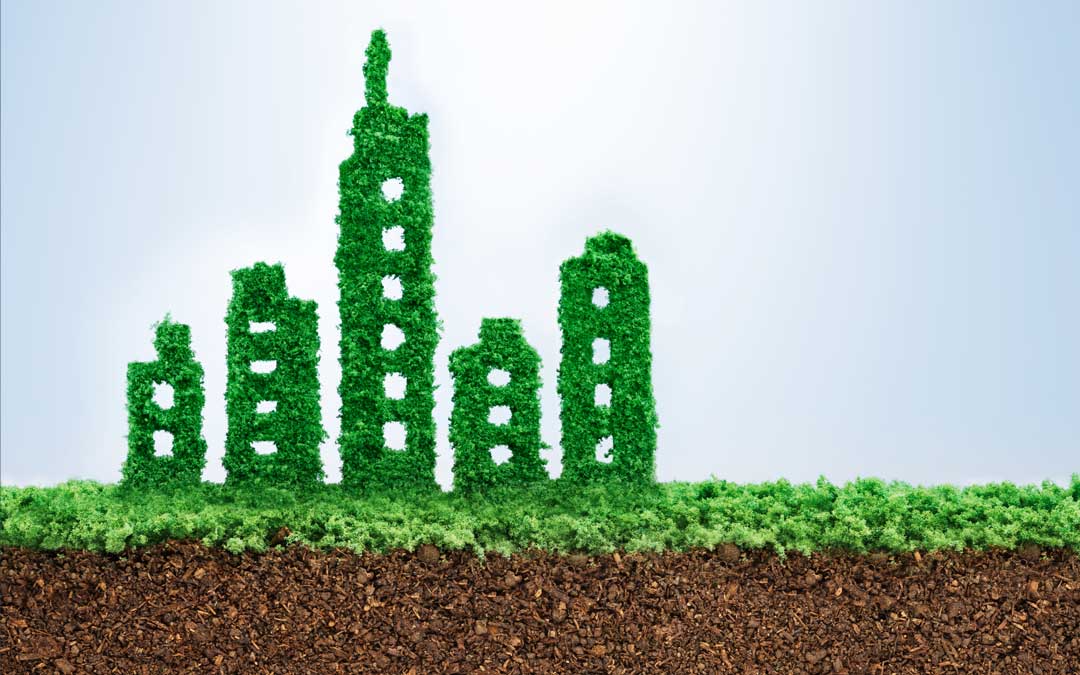 The corona virus has had a number of unintended consequence – one of them being that Earth has had a chance to breathe because of the pause button that has been hit of gaseous emissions. What do we do to sustain this regeneration of our planet? Cities and industrial areas are major pollutant producers and working towards the establishment of green cities is one way we can ensure we put into practice a lesson learned during Covid-19.

About 10 000 years ago, the Neolithic Revolution brought about massive innovations in agriculture and food production. Human population density increased as a result and urban areas began to develop. And the city was born.

The societal proximity these areas encouraged, in combination with our penchant for collaboration, allowed humans to more easily exchange ideas, share natural resources and create large local markets. We began to innovate at unprecedented rates. Engineering greater efficiencies in relation arduous tasks like farming, lifting and carrying meant that we were able to focus our attention elsewhere and advance even further.

In their current state, however, cities are highly problematic. The lifestyles of most city inhabitants are resource-intensive and highly wasteful. In a world where resources are rapidly declining, air temperatures are rising and pollution threatens entire ecosystems, it’s a case of adapt or die. Cities need to change. To be successful, they need to be in harmony with natural resources and their surroundings.

Pushing cities in this direction is an emerging economy, one with resilience and the efficient use of resources at its centre. According to economists, we are primed to see three major changes in economic thinking. First, greater value will be placed on the ecosystem. Societies will reward clean living while penalising wastefulness. We’ll then see a fairer distribution of resources, with renewables being priced to ensure that they’re accessible to all. Finally, our legislative frameworks will begin to shift to promote the effective use of renewables. This is when green cities will blossom.

One of the first steps that can be taken to turn a city green is to retrofit it to reduce emissions. This can be done by creating sustainable infrastructure, cleaner transportation and renewable energy. Streets can be refashioned, introducing walking and cycling paths. Where roads require refurbishment, renewable energy capture cells can be included in the construction.

Green spaces must also be included in the city landscape to ensure we are able to improve air quality, combat urban heat, increase biodiversity and enable intensive food production. Vertical farms and gardens are of great value here. Not only are these installations aesthetically pleasing, but they also solve a major problem: feeding a growing population sustainably. Flexible design and relooking planning structures will aid in creating these green, sustainable spaces. New and existing public transport nodes, for example, will need to be designed and upgraded to include high-density, mixed-use areas, reducing the need for commuters to travel extra kilometres to buy groceries or get the kids to school.

The Fourth Industrial Revolution is another building block in the green city. Using the Internet of things and geospatial technology, city planners can gather information about objects to plan for efficient use of resources, optimal transport and minimising pollution. To do this, there must be an integration of geospatial data, multidimensional indicators, sustainable development goals and modelling tools to help cities define their vision, identify areas for action and investment strategies.

There is a great opportunity to apply this technology in a developing nation like South Africa. Rapid urbanisation and the subsequent challenges in the management of social, economic and environmental aspects of the city are major challenges facing our cities. With fast-growing and vulnerable populations, it’s often difficult to plan in the face of rapid expansion. Geospatial technology and the information gleaned therefrom can help us to track our urban footprint, understand the impact of our interventions and adapt accordingly.

One city that has taken advantage of this technology is Johannesburg. Using information and data gathered by the World Bank and Global Environment Facility, the city recently tabled its Spatial Development Framework 2040. Before putting the framework together, a metro-wide analyses that considered inequality and poverty, job-housing mismatches, spatial disconnection, low walkability and land-use defects was conducted. The data was then used to inform city planning as well as to create a city planning development scenario or ‘spatial vision’ for the future.

While the South African government has taken steps in the right direction with the National Land Transport Act and Carbon Tax Act, there is still too much policy incoherence to encourage a truly green economy.

Elements necessary for reform are spread across the National Growth Plan, National Development Plan, policies put forward by the Development Bank of South Africa, and endless reports and papers. But plans, papers and reports do not a green economy make. South Africa must consolidate all of these goals and create a cohesive plan of action to ensure that we can flourish.

Stuff You Should Know